And finally after more than 1 and a half years of long and boring waiting, our 1st trip as fixers arrived and this time we were returning to one of our favorite regions to work; Madre de Dios and the best thing is that we are heading to a new area of this fascinating Amazon region: the Brazilian nut concession of our friends from the Finca Las Piedras biological station.

Since 2020 we had our first contact with the British producer Wildspace Productions who were looking for a forest area in Peru with a high density of Brazilian nut trees (Bertolletia excellsa) to be able to film the entire biological cycle of this species and its interaction with mammalian species and insects on which it depends. Thus, in August and September of the current year they were at the station filming in the undergrowth for up to 21 days.

This second trip was perhaps the most challenging, since it was time to film the pollination of Brazilian nut flowers, yes, at a height of more than 35 meters. Here we had to use the information from the monitoring of Brazil nut trees made by the biologists and researchers of the center, to coincide with the dates or the time in which they come out the buds in the treetops, being able to film the opening of the flowers and later, the arrival of the bees that pollinate them.

And to achieve all this, our fixer and 6 experts in canopy structures traveled up to 10 days before the arrival of the team at Finca Las Piedras to build a filming tower of more than 35 meters high and to be able to be, practically, in front of the Brazilian nut blossoms before they open so that the cameraman could, for 30 days, film the entire process that we have described.

Without a doubt, it was a huge challenge to find the exact location and position where to start the careful assembly of this tower that had to be not only safe if not stable and in turn, it had to have the upper platform just at the height and above all, the proximity that our demanding cameraman had requested. Of course thanks to the experience of our entire team, we succeeded !!! In 30 days we will return to disarm the tower and there we will know how the filmmakers did. Don’t go, we’ll be back! 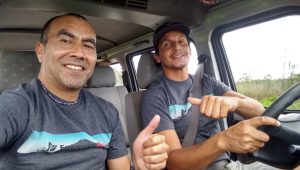 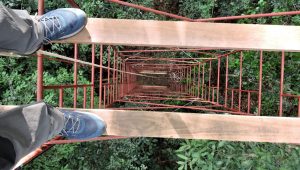 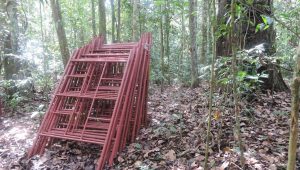