My Life – Child of the wild – CBBC

In November 2021 we were contacted by the creative director of the English production company Big Deal Films, this time recommended by a client that we assisted in the year 2015-2016. The specific request of the producer was to find a boy or girl of native origin between 9 and 11 years old, who has some outstanding ability or a dream that they want to achieve in the future. A wish, a dream or a goal.

Inquiring with our contacts who work on projects with NGOs in native communities, we came to the Cultural Zone of the Manu National Park as the most promising option.
Patricio Zanabria, a friend and member of an organization that works with the Machiguengas native group for several years, recommended an 11-year-old boy named Geremias Manqueriapa from the native community of Palotoa, who fit the format that was being sought, to which his sympathy, mischief and ease of interacting with outsiders, in addition to his skills for fishing and traditional activities typical of the Machiguenga ethnic group. All this grouped the characteristics of the target child, therefore videos and photos were requested in order to meet the chosen potential.

Thus, after several meetings, Geremias was chosen for this program produced for the BBC, specifically for the children's channel called CBBC. In the process, part of the team spoke with Geremias and his parents via whatssapp to learn more about his life and his concerns. Geremias and his personality exceeded expectations.

Finally, in August of this year, the project became a reality after several days of coordination between all those involved. Patricio traveled to the community to present the project both to the authorities of the same community and to the Geremias family, it was possible to specify and polish the story and sequence between the creatives and the director.

Specifically, what we wanted to tell as a story is how a child from a traditional native community begins an extraordinary journey that begins in the heart of the Peruvian jungle and ends in the big city (Lima) and in front of the Pacific Ocean. There were 15 days of filming where the incredible journey of Geremias and his reunion with the fisherman and Forest Engineer Lucho Ríos, whom he met several years ago in Palotoa and who now under his tutelage experienced the big city and the experience of fishing in the sea and not in the river as he was used to. This adventure becomes not only a learning opportunity for Geremias, but also a window to understand that the world around us is diverse and complex, and this experience may even impact many children around the world and in their own community.

We want to thank Geremias for his authenticity, naturalness and charisma, his parents, the native community of Palotoa and all those who made it possible for this dream and history to come true. Hopefully this experience will have a positive impact. 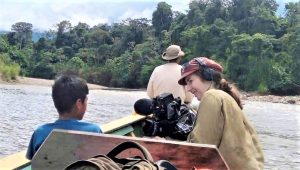 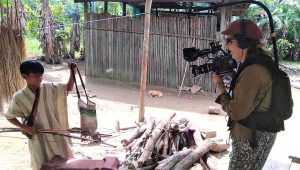 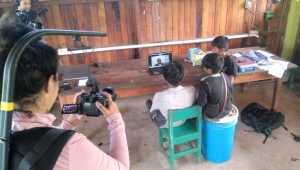 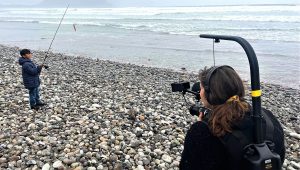