During September of 2014, Ecologistica Perú was summoned by the Field Museum of Chicago’s Deparment of Science and Education, to lead one of the groups that would be in charge of the construction of camp #1 for the Rapid Biological Inventory that would take place on the proposed area of conservation at the rivers Tapiche-Blanco in Loreto.

On this occassion, the logistic work lasted approximately 15 days and consisted mainly on implementing a camping area that could comfortably host 20 people for 5 days, an heliport and a system of trails, covering more or less 22km, that would lead to the different habitats and types of forests present in the surrounding area. It is important to point out that the habitats surrounding the area were basically white- sand forests and flooded forest that, during rain season, are completely covered by water. It was definitely an interesting area from a scientific point of view, and it was a surprise for us to find patches of Varillal forest and Turberas which, without a doubt, will throw an interesting record of fauna and flora.

The job was possible thanks to the cooperation of our friends from the communities of Nueva Esperanza, Frontera, Lobo, Nuevo Progreso and Morales, who played a key role in succesfully fulfilling the objective of this project. 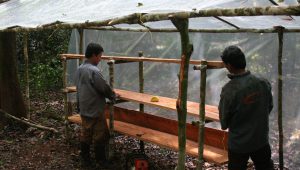 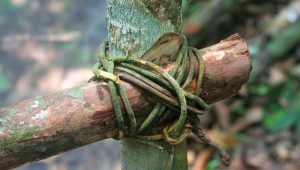 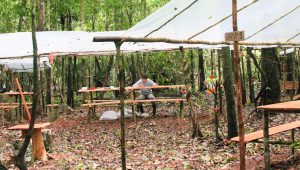